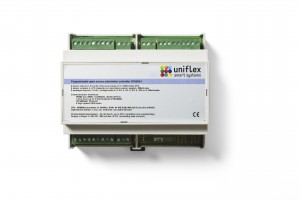 Ask for an offer

IoT (internet of things) is a network of things connected via the internet, where technical devices share and exchange information with one another and fulfil certain tasks together. For example, smartphones, kitchen appliances, washing machines, cars, medical equipment, buildings – the list is endless. It is estimated that the number of IoT devices in the whole world may exceed 50 billion by 2020.

We can make different technical equipment communicate reasonably with one another – we connect successfully physical world with virtual.

The crown jewel of our hardware range is a freely programmable powerful Linux-based automatic controller, which can be used in very different applications and situations, such as from a smart house in Sydney to street lighting in Tartu.

The advantage of the controller is its versatility and expandability. With the help of channels added through expansion modules, it is possible to communicate in exactly the same way as with the channels provided with the controllers – this is a very important and rare feature among similar controllers.

Basically, our controller consists of our proprietary I/O card (which is the only content of the expansion module) and CPU module (not available in the expansion module). For a CPU board we use Olinuxino iMX233 Maxi, which fits in the standard 6M DIN rail without any screws. Compared with, for example Raspberry Pi, Olinuxinol sockets are arranged in a more reasonable way and the range of temperature resistance is also wider.

Each IO board has its own Modbus address, each board provides 8 analogue inputs, 8 binary inputs, 8 binary outputs and 1 onewire bus. Modbus RTU interface is always be there, but the board can also accommodate USR K3 Ethernet module, which also provides the ability to communicate via ModbusTCP. In addition, the I/O board can be equipped with a Wi-Fi module, which also facilitates ModbusTCP compatibility. It is a native ModbusTCP, not to a variant of ModbusRTU via TCP (although it is also possible, if requested).

The value and uniqueness of our controller lies in the I/O card. Any Modbus master can be used and it may be located as a server somewhere in the (local) network. I/O cards may be installed in an electrical board or where necessary, by receiving signals from switches and sensors and if needed creating binary or PWM control signals. Some of the binary inputs can be used with Wiegand readers. Analog inputs (with a resolution of 12 bits (with measuring ranges 0–2 V, 0–4 V, 0–5 V, 0–10 V, 0–20 mA) are individually configurable to function as binary inputs and they can also be used as high ohmic outputs. It is sufficient to have one expansion module with an Ethernet-interface in a group of I/O boards via RS485 to connect all I/O channels with Modbus Master located in the PC, if requested.

Analog inputs are ideal for use in the so-called DEOL (Dual end of the line) safety lines, in which changes in the line resistance are used to detect error conditions in the line (short circuit or interruption). To avoid reading it via analogue value reading (16-bit word per each sensor), the I/O board is equipped with comparators, an output (2 bits per each sensor) of which allows reading sensors 8 times faster. One bit represents the status of the signal and the other one the fault of the line – meaning combinations (short circuit/0/1/interruption).

The I/O board is provided with a 5 V supply stabiliser, which turns any DC voltage in a range of 9–28 V into a very stable 5 V 1.5 A power supply. The same 5 V can be used to supply the CPU board and, in case Modbus communication should be interrupted for some reason, the I/O board initiates an interruption in CPU 5 V supply (it is especially of great help to activate the CPU module in the case of such Embedded Linux boards, in which USB and Ethernet are designed by using the same die). The I/O board can also be provided separately with a binary output supply. This allows a 12 V battery supply, for example, but at the same time the use of 24 V actuators. Examples of such actuators are thermal drives of heating valves, which are controlled directly by the I/O board. The quality of the I/O board is also proven by the fact that, if needed, the firmware of the board can also be updated via a network by entering Modbus instructions in the special registry. Only the first programming related to the production is always done with PIC programmer.

The use of the controller or I/O modules alone is limited only by imagination. For example, one of our controllers with the highest load is in Väätsa elementary school, where with the help of five expansion modules it transmits over 550 signals (which come from 19 electricity meters, eight heat meters, thirteen temperature, humidity and CO2-sensors, PV inverter and wind meter) to the UniSCADA monitoring system, and it is amongst others that are also responsible for the cost-effective control of the ventilation and heating system of the school. Other applications based on this controller involve mostly either pumping systems or smart house applications or applications meant simply for collecting information regarding electricity consumption. In more simple cases, we use Barionet 100 controllers made by the Swiss manufacturer Barix instead of Linyx masters.

Benefits of our controller compared to other similar products:

– configurable power-on level;
– single or periodical pulses from 1 to 4095 ms.

– 4 inputs usable for up to two Wiegand readers;

• 1-wire interface for up to nine DS18B20 temperature sensors

The application software running on this controller can be written in any programming language supported by Linux OS.